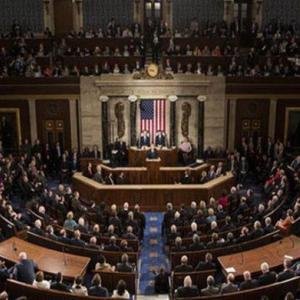 45% Left coverage: 38 sources
Former President Donald Trump suggested on Saturday that the U.S. Constitution be terminated in order to rectify the outcome of the 2020 presidential election. Trump's comments follow the release of the so-called Twitter Files by Twitter owner Elon Musk on Friday. Journalist Matt Taibbi was granted access to internal Twitter documents regarding the social media company's handling of a New York Post story about the contents of a laptop belonging to Hunter Biden.See the Story
Raphael Warnock · Washington

74% Center coverage: 35 sources
Sen. Raphael Warnock’s (D) victory over Republican Herschel Walker in Georgia’s Senate runoff Tuesday night wrapped up the 2022 midterm election season and set the stage for the 2024 presidential election. The Democrat’s victory also gives his party more leverage with their majority in the Senate and signifies yet another midterm loss for a candidate endorsed by former President Trump. See the Story

Left50%
Center50%
Right0%
Blindspot
Get the weekly Blindspot report sent to your inbox and stay up to date with your bias blindspot.

100% Center coverage: 1 sources
Debra Baum and others started the Highland Park Gun Violence Project after witnessing the horror of the July Fourth parade shooting there. Baum said the weapons fire so rapidly and the damage to bodies so great that people are like sitting ducks. Her group produced a public service announcement urging people to call their U.S. Senators.See the Story
U.S. Senate · Washington

Here's how Forsyth County voted in the U.S. Senate Runoff

100% Right coverage: 1 sources
You know the next political round has begun when pundits are already calling Georgia's senator a presidential prospect.See the Story
Twitter · Missouri

Share on Facebook Share on Twitter (KTTS News) — Missouri Senator Roy Blunt gave his farewell speech on the Senate floor Tuesday. He thanked voters for giving him the chance to serve. Blunt says finding someone onSee the Story
US & Canada · Washington

100% Center coverage: 1 sources
NFT games have a profound impact as they provide alternative revenue streams and immersive learning environments. Lost World's allows users to collect and mint real world locations on NFT. CaesarVerse is focused on the Roman era and is building an immersive environment where players can learn about time in this era.See the Story
U.S. Senate

The last seat of the U.S. Senate belongs to the Democrats. Raphael Warnock's victory in the Georgia run-off results in a 51-49 final score in Biden's favor. A hit for Trump and a boost for the Democratic Party that should not be underestimated.See the Story

How is the media covering U.S. Senate?