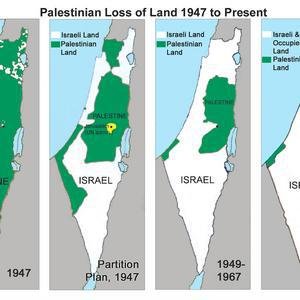 48% Left coverage: 25 sources
Al Jazeera on Tuesday said it filed a lawsuit at the International Criminal Court against Israeli forces over the killing of Palestinian journalist Shireen Abu Akleh, who was shot during an Israeli raid in the West Bank in May.See the Story
US & Canada · Jerusalem

74% Center coverage: 24 sources
U.S. weapons maker Lockheed Martin (LMT.N) and Israeli contractor Rafael have teamed up to create a high-energy laser weapon system, based on a technology already under development in Israel that could be market ready next year.See the Story
Middle East · West Bank

50% Right coverage: 16 sources
Omar Manaa, 22, was killed by Israeli fire during a military raid in the occupied West Bank on Monday. It was the latest death in a recent surge of violence in the territory. The Israeli military has been conducting daily raids throughout the West Bank since the spring. More than 140 Palestinians have been killed in Israeli-Palestinian fighting this year.See the Story

67% Center coverage: 3 sources
Incoming Israeli Prime Minister Benjamin Netanyahu has signed a coalition agreement with Religious Zionism party leader Bezalel Smotrich that will give the far-right politician unprecedented authority over the policy on Israeli settlements in the occupied West Bank and relations with the Palestinians. See the Story
Fishermen · Gaza Strip

34% Center coverage: 3 sources
Fiberglass has been banned from entering Gaza since 2007. Israel says the material could be used for military purposes by Gaza militants. The United Nations brokered a deal that allows fiberglass to reach a supervised workshop. The repair process takes two weeks to a month for every 10 boats.See the Story
Israeli-Palestinian Conflict · West Bank

Smotrich can’t annex the West Bank, so he annexed the defense establishment

100% Left coverage: 1 sources
Religious Zionism will be given the authority to appoint the Coordinator of Government Operations in the Territories. The party will also have a say in the process of selecting the head of the Civil Administration. Both appointments are to be made in coordination and agreement with the defense minister and the chief of staff.See the Story
Israeli-Palestinian Conflict · West Bank

100% Left coverage: 1 sources
Religious Zionism will be given the authority to appoint the Coordinator of Government Operations in the Territories. The party will also have a say in the process of selecting the head of the Civil Administration. Both appointments are to be made in coordination and agreement with the defense minister and the chief of staff.See the Story
Hamas · Jerusalem

Israel carries out strikes on Gaza after rocket attack

60% Center coverage: 20 sources
Palestinians have pushed back against Israeli police claims that an Israeli border police officer who shot to death a 22-year-old Palestinian at close range acted in self-defense. The shooting had been caught on video and was widely shared on social media.See the Story
Israeli-Palestinian Conflict

Israeli police after individuals without permits draw guns, use pepper spray in raid

100% Left coverage: 1 sources
Israel Police and Border Police forces arrested three people Monday evening at a restaurant in the predominantly Arab Israeli city of Baka al-Garbiyeh. The police officers had arrived at the scene to detain individuals residing in Israel without a permit. Among those arrested was a resident of the Palestinian city of Tul Karm.See the Story
Israeli-Palestinian Conflict

Head of Israel Bar Association: People should protest new government in the streets

100% Left coverage: 1 sources
In an Interview With Haaretz, Avi Himi Warns That the New Government Wants 'To Turn Us Into Hungary’ and Calls on Judges Not to Cooperate With Changing the Supreme Court’s Seniority SystemSee the Story

The Washington Post
Lean Left
Suggest a source
Looking for a source we don't already have? Suggest one here.

How is the media covering Israeli-Palestinian Conflict?