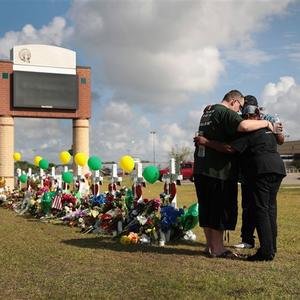 59% Center coverage: 214 sources
Alex Jones filed for bankruptcy on Friday, less than two months after a jury ordered him and the parent company of his Infowars website to pay nearly $1 billion in compensatory damages to relatives of victims of the 2012 Sandy Hook mass shooting.See the Story
US & Canada · Uvalde

68% Center coverage: 121 sources
Nearly three dozen survivors of the May massacre at Robb Elementary School in Uvalde, Texas, filed a class action suit against various law enforcement agencies on Tuesday. The lawsuit scorches law enforcement's response to the tragedy, arguing that agencies strayed from protocols. 19 children and two teachers were shot and killed in what became the second-deadliest school shooting in U.S. history.See the Story
US & Canada · Uvalde

69% Center coverage: 80 sources
The last conversation Sandra Torres had with her 10-year-old daughter was about her nervous excitement over whether she’d make the all-star softball team. Hours later, Eliahna Torres was one of 19 children and two teachers massacred at their elementary school in Uvalde, Texas.See the Story

Left71%
Center29%
Right0%
Blindspot
Get the weekly Blindspot report sent to your inbox and stay up to date with your bias blindspot.

Alex Jones files for bankruptcy after Sandy Hook $1B verdict

100% Left coverage: 1 sources
Jones, the host of Infowars, filed for chapter 11 protection in the U.S. bankruptcy court in Houston, Texas. A Connecticut jury awarded almost $1 billion in damages to plaintiffs who accused Jones of committing defamation when he called the 2012 Sandy Hook Elementary School shooting a hoax. Jones had claimed that the shooting at Sandy Hook was performed by actors following a script written by government officials to bolster the push for gun control.See the Story
US & Canada · Michigan

71% Center coverage: 7 sources
Policies and procedures that could have prevented a mass shooting that left four students dead at a Michigan high school last year were approved earlier but never implemented, two former school board officials said Monday.See the Story
US & Canada · Uvalde

State police 'did not fail' in Uvalde, Texas chief says

73% Center coverage: 11 sources
Texas' state police chief says his department "did not fail the community" Uvalde during the hesitant law enforcement response to the school shooting. Republican congressman joins angry parents in calling for him to resign. Col. Steve McCraw says a criminal investigation into the shooting will be wrapped up by the end of the year.See the Story
US & Canada

67% Center coverage: 9 sources
At least three people were killed, including the suspect, and seven more were injured after a shooting Monday morning at Central Visual & Performing Arts High School in south St. Louis. Queen Elizabeth II, Britain's longest-reigning monarch and a rock of stability across much of a turbulent century, died Sept. 8, 2022, after 70 years on the throne. Olivia Newton-John, the Grammy-winning superstar who reigned on pop, country, adult contemporary and dance charts with such hits as You're the One That I Want? and won countless hearts as everyone's favorite Sandy in the blockbuster film version of Grease, was 73. Bill Russell, the first Black head coach in any major U.S.See the Story
US & Canada

62% Center coverage: 16 sources
Two-thirds of Americans think the federal government is not doing enough to fight climate change. A completed documentary about the rapper formerly known as Kanye West has been shelved amid his recent slew of antisemitic remarks. Mary J. Blige has joined first lady Jill Biden to promote cancer prevention.See the Story
Alex Jones

Jurors must decide how much Newtown families suffering worth

79% Center coverage: 19 sources
Ethan Crumbley, now 16, faces trial next year as an adult on murder and other charges in the Nov. 30 shooting. A lawyer representing victims' families says some teachers and a counselor were aware of the suspect's troubling behavior months before the mass shooting last fall. The day before the shooting, a teacher saw Ethan Crumbles looking at ammunition on his phone while in class.See the Story
US & Canada

80% Center coverage: 5 sources
The Michigan Supreme Court has temporarily paused the trial of Jennifer and James Crumbley, the parents of Oxford High School shooter Ethan Crumbley, and ordered the state Court of Appeals to reconsider whether there is enough evidence to charge them in connection with their son’s actions.The Court of Appeals denied an appeal from the Crumbleys in September that sought to put a stay on the couple’s trial in Oakland County Circuit Court and to de…See the Story

How is the media covering School Shooting?