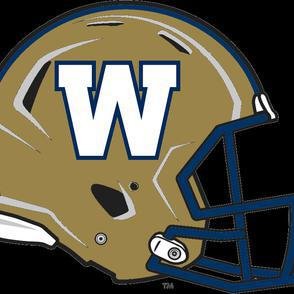 Coverage: 7 sources
Winnipeg Blue Bombers linebacker Adam Bighill has signed a two-year contract extension. The 34-year-old was scheduled to become a free agent in February. He is a three-time Grey Cup champ with the Bombers, and 2011 with the B.C. Lions.See the Story
Grey Cup · Winnipeg

60% Left coverage: 5 sources
The Blue Bombers announced Saturday that they have signed all-star defensive end Willie Jefferson to a one-year contract extension. Jefferson was set to become a free agent in February. He has 57 sacks and 202 tackles over 126 career CFL games with Edmonton, Saskatchewan and Winnipeg. With Jefferson in place, the Bombers now turn to bringing back other parts of their team.See the Story
Grey Cup

75% Center coverage: 4 sources
Winnipeg Blue Bombers head coach Mike O'Shea has signed a new three-year contract with the team. The deal will keep the 52-year-old in Winnipeg through the 2025 season. He led the Bombers to back-to-back Grey Cup titles in 2019 and 2021 (the 2020 season was cancelled because of the COVID-19 pandemic)See the Story

49% Center coverage: 8 sources
Toronto Argonauts fans will take over the city's downtown Maple Leaf Square today. Rally will feature the team hoisting the Grey Cup trophy along with special remarks, programming, a live DJ and more. Fans are being encouraged to dress for the weather and to wear the Argo's dark and light blue colours.See the Story
Grey Cup

'Close but no cigar:' Jefferson, Bombers reflect on up-and-down season

60% Left coverage: 5 sources
Willie Jefferson expects to sign a contract extension with the Winnipeg Blue Bombers soon. Winnipeg's quest for a third straight Grey Cup championship was surprisingly halted by a 24-23 loss to the Toronto Argonauts in Sunday's 109th Grey Cup in Regina. The Bombers were the league's best team and recorded a franchise-record 15 wins.See the Story
Grey Cup · Toronto

45% Center coverage: 20 sources
The Winnipeg Blue Bombers lost 24-23 to the Toronto Argonauts in the 109th Grey Cup at Mosaic Stadium in Regina. The Bombers were looking to become the first team in 40 years to win three consecutive CFL championships. A missed convert by place-kicker Marc Liegghio and a blocked field goal in the final minute played major roles in the Bombers loss.See the Story
Grey Cup · Regina

75% Center coverage: 4 sources
The Toronto Argonauts face the Winnipeg Blue Bombers in the 109th Grey Cup game tonight in Regina. The Argos are making their first appearance in the CFL's biggest game since they won the cup in 2017. Meanwhile, the Bombers have been the most dominant team in Canadian football for the past three seasons, winning the Cup in 2019 and 2021.See the Story
Winnipeg Blue Bombers · Winnipeg

100% Left coverage: 1 sources
Dalton Schoen led the CFL in receiving yards with 1,441 on 70 receptions. He tied for the most touchdowns (16) this season with Ottawa's Caleb Evans. Schoen won the league's 2022 rookie award Thursday night. The 26-year-old out of Kansas State was a quick study with the Blue Bombers.See the Story
NFL · Regina

Coverage: 4 sources
Winnipeg Blue Bombers quarterback Zach Collaros proclaimed himself fit to start the Grey Cup against Toronto on Sunday. The 34-year-old says he missed the workouts at the advice of training staff who are treating his right ankle, which he hurt late in last Sunday's West Final win over B.C. The Bombers say the weather, which has been blustery and snowy in Regina this week, played a role in the decision to keep the CFL's top quarterback off the field.See the Story
Grey Cup · Regina

43% Left coverage: 7 sources
Quarterback Zach Collaros was held out of practice on Wednesday because of an ankle/foot injury he suffered late in the West final last Sunday at IG Field. The Bombers look to win their third straight CFL championship with a victory over the Toronto Argonauts on Sunday. Dru Brown was at the controls of the starting offence during practice and would be the starter with Dakota Prukop backing up. The situation seems eerily similar to 2007 when Bombers starter Kevin Glenn broke his arm in the East final and they had to miss the Grey Cup.See the Story

Global News
Lean Left
Suggest a source
Looking for a source we don't already have? Suggest one here.

How is the media covering Winnipeg Blue Bombers?