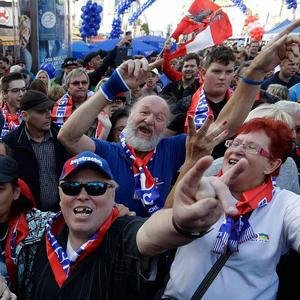 50% Right coverage: 8 sources
Religious Zionism wants to influence policy in the West Bank. Likud wants to keep the key post of defense minister. "There was still misunderstandings and disagreements on the matter of defense," lawmaker says. The new government looks to be the most right-wing in Israel's history.See the Story
Europe · Berlin

Coverage: 7 sources
Ingeborg Godenau has a long history of involvement with far-right parties and groups. She had petitioned the court to order her name removed from a list of teachers. The woman said that as a result of the listing all her applications for teaching posts had been unsuccessful.See the Story
Far-Right

100% Left coverage: 1 sources
‘Why Not Teach Kids About Heinrich Himmler Or Otto Skorzeny Instead?’ Suggest Far-Right CommentatorsSee the Story

Mayor Adams blasts ‘far left’ for ‘doing nothing’ on border crisis: ‘I don’t believe the silence’

Left43%
Center49%
Right8%
Blindspot
Get the weekly Blindspot report sent to your inbox and stay up to date with your bias blindspot.

44% Left coverage: 62 sources
France's lower house of parliament suspended its session on Thursday after a far-right MP shouted, "Go back to Africa!" The comment created a huge commotion. centrist government and left-wing alliance said it was an unacceptable racist slur. The far right argued MP Gregoire de Fournas was not aiming the words at the MP who asked the question.See the Story
Benjamin Netanyahu · Jerusalem

Brazil's Bolsonaro avoids concession to Lula, but transition to begin

46% Left coverage: 79 sources
Brazil's far-right President Jair Bolsonaro on Tuesday avoided conceding defeat to leftist Luiz Inacio Lula da Silva in his first public remarks since Sunday's election, saying protests since then were the fruit of "indignation and a sense of injustice" over the vote.See the Story
Europe · Berlin

60% Left coverage: 5 sources
Two traffic signs and a map of the memorial were spray-painted with the symbols. The Buchenwald and Mittelbau-Dora Memorials Foundation said it was appalled by the incident. Seven trees dedicated to the memory of victims of the Nazi-era concentration camp were chopped down in July.See the Story
Europe · Rome

50% Center coverage: 10 sources
Satellite monitoring showed 1,455 square kilometers (562 square miles) of forest cover was destroyed in the Brazilian Amazon last month. The area is equivalent to 25 times the size of Manhattan, and the worst for September since the program was launched in 2015. The previous record for September was also under Bolsonaro: 1,454 square kilometers in 2019.See the Story

How is the media covering Far-Right?