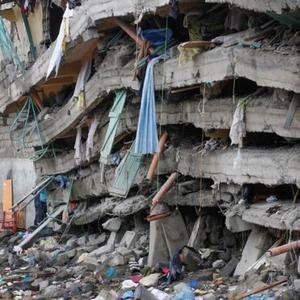 38% Center coverage: 108 sources
The death toll from the earthquake that shook the Indonesian island of Java leapt to 268 on Tuesday as more bodies were found beneath collapsed buildings, and 151 people are still missing, the National Disaster Mitigation Agency said.See the Story
Red Cross

50% Center coverage: 4 sources
Residents from all 30 of the building's units were evacuated. An emergency overnight shelter is in place at the Salvation Army in Lebanon. It is unclear at this time if there were any injuries, what condition the building is in, how many people were displaced, or how long the clean-up efforts will take.See the Story
Evacuations

Another 5-storey building collapses in Kenya after mass evacuation

100% Left coverage: 1 sources
A five-storey building in Ruiru town collapsed a day after the county government ordered the residents to vacate. The building which is just opposite Ruiru Police station had visible cracks on Sunday and locals raised the alarm. This is the third house to collapse in Kiambu County since Kimani Wamatangi took the oath of office.See the Story

53% Center coverage: 62 sources
A once-luxurious Miami Beach hotel that hosted the Beatles and President John F. Kennedy during its 1960s heyday was imploded Sunday after falling into disrepair and abandonment in recent years.See the Story
Europe · Lille

34% Center coverage: 12 sources
Rescue workers retrieved one body early Sunday in the northern French town of Lille. Two small adjoining houses collapsed in a shopping street in the city centre at around 9:15 am local time (0815 GMT) on Saturday. The homes were evacuated during the night as a precaution following a warning that one of the walls was "warped"See the Story
Europe · Lille

Building collapses in French city of Lille after last-minute evacuation

39% Left coverage: 13 sources
French authorities said a building collapsed early on Saturday morning in northern France's city of Lille, shortly after it was evacuated thanks to a local resident's advance warning, though one person was still reported missing.See the Story
Middle East · Baghdad

Coverage: 14 sources
Iraq’s state news agency says that at least 20 people have been injured after a commercial building in the capital Baghdad caught fire and collapsed. The official Iraqi News Agency said Sunday that the country’s civil defense director along with a number of firefighters were at the scene when the burning building collapsed and counted among the wounded. See the Story
Building Collapse · Chennai

Two dead after building collapses on Mint street in Chennai

Coverage: 2 sources
Two people died after a 100-year-old building on NSC Bose road in Sowcarpet collapsed. PK Sekar Babu, Minister for Hindu Religious and Charitable Endowments Department, says 66 buildings in the Harbour Assembly constituency are unsafe and that 96% of them are unoccupied.See the Story
Evacuations · Miami Beach

57% Right coverage: 7 sources
Four-year-old Khushi was the only girl-child to be born after two generations in her family, her relatives said on Monday. Khushi and her father Sukhbir were buying some items from a shop situated on the ground floor of the building that collapsed. Her mother claimed that her husband has lost his leg in the incident.See the Story
Building Collapse

50% Right coverage: 6 sources
Five people were injured after the roof of a building collapsed in New Delhi. Three to four more people are believed to be trapped under the debris. Five fire tenders have been rushed to the spot and five people have been shifted to the hospital. Rescue operation is on to locate others, he said.See the Story

Times of India
Lean Right
Suggest a source
Looking for a source we don't already have? Suggest one here.

How is the media covering Building Collapse?