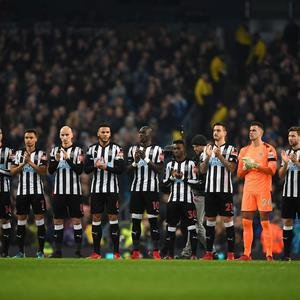 Coverage: 13 sources
Oxford United will host Arsenal in the third round of the FA Cup. The Gunners are five points clear at the top of the Premier League. The North London outfit have won the FA cup a record 14 times. The U's edged past Vanarama National League side Woking in a rearranged first round clash earlier this month.See the Story
Soccer

57% Right coverage: 7 sources
Grealish drunkenly criticised Almiron during the club's trophy parade. Manchester City midfielder was keen to set the record straight. Grealish messaged Matt Targett to say he was sorry for his comments. Almiron has been in fine form this season, scoring eight goals in 15 games.See the Story
Newcastle United · Wales

Former England captain Paul Ince believes Kieran Trippier should start against Senegal on Sunday. The Newcastle United defender lost his place to Manchester City's Kyle Walker in the 3-0 win over Wales. Ince also gave his views on the England frontline but feels Harry Kane doesn't have much support.See the Story

Jamaal Lascelles has made just six appearances for Nottingham Forest this season. The 29-year-old was not even named in the matchday squad at St James' Park. Forest are 'keen' to re-sign the defender during the January transfer window.See the Story
Newcastle United

Newcastle United defender Fabian Schar helped Switzerland secure their passage to the Qatar World Cup Round of 16 following victory over Serbia. Former Magpie Aleksandar Mitrovic and Newcastle-linked striker Dusan Vlahovic scored for Serbia. Tite named a rotated side for the clash with Cameroon, but there was no room in his starting line-up for Guimaraes.See the Story
Newcastle United · Newcastle upon Tyne

'I knew it was a big decision': Bruno Guimaraes makes Newcastle United claim

Bruno Guimaraes says St James's Park is a home away from home. Midfielder has been a revelation for Newcastle since joining in January from Olympique Lyonnais. Brazil star also talks about the influence of his parents on his career. He is currently at the World Cup in Qatar with his country.See the Story
Newcastle United · Newcastle upon Tyne

Both Group G games will kick-off simultaneously at 7pm (GMT) and are the final set of group stage games. Brazil have already qualified from the group but need a point to guarantee top spot. Switzerland have their World Cup fate in their own hands and know that a win against winless Serbia would see them into the next round. Serbia will have Aleksandar Mitrovic leading the line for them tonight.See the Story

Football365
Unknown
Suggest a source
Looking for a source we don't already have? Suggest one here.

How is the media covering Newcastle United?