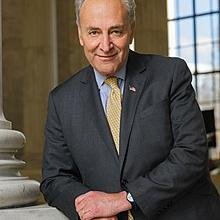 How is the media covering Chuck Schumer? 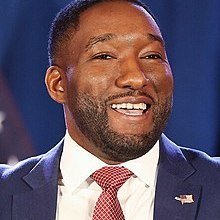 R
Joe Pinion
Charles Ellis Schumer is an American politician serving as Senate Majority Leader since January 20, 2021. A member of the Democratic Party, Schumer is the senior United States senator from New York, a seat he has held since 1999. He is the dean of New York's congressional delegation.
2022 Senate Election
New York Senate Election
Location of Coverage About Chuck SchumerBased on 201 recent stories
17% Local Coverage70% National Coverage13% International Coverage

How is the media covering Chuck Schumer?

50% Center coverage: 149 sources
The Respect for Marriage Act, a bill to codify protections for same-sex and interracial marriage, on Wednesday cleared a major procedural hurdle in the Senate after garnering enough support from Senate Republicans.See the Story
Politics · Harrisburg

61% Right coverage: 43 sources
Schumer, Biden and Sen. Kirsten Gillibrand were seen talking on the tarmac at Hancock International Airport Thursday as the Democratic leaders headed to Onondaga Community College to promote Micron Technology's plans for a $100 billion microchip plant. The conversation showed they were also focused on the near future with the 2022 midterm elections. Schumer said it's hard to believe that they will go for Herschel Walker in Georgia.See the Story
US & Canada · Washington

50% Right coverage: 18 sources
Democratic Sen. Catherine Cortez Masto's victory in Nevada gave Democrats the 50 seats they needed to keep the Senate. The fate of the House was still uncertain as the GOP struggled to pull together a slim majority there. The party still lacks the 60 votes in the Senate needed to move many kinds of major legislative changes.See the Story

As midterms draw to a close, Biden stumps for Hochul in N.Y.

36% Center coverage: 17 sources
On the final weekend day before Tuesday's midterms, President Joe Biden traveled not to a battleground state, but to the Democratic stronghold of New York to stump for incumbent Gov. Kathy Hochul, who is attempting to stave off a tough Republican challenger. Biden slammed Republican challenger Lee Zeldin for his stances on abortion rights and gun safety. Biden warned that the country is at an "inflection point" when it comes to the future of American democracy.See the Story
Nancy Pelosi · Washington

46% Center coverage: 13 sources
House Speaker Nancy Pelosi (D-Calif.) and Senate Majority Leader Chuck Schumer (D-N.Y.) invited Israeli President Isaac Herzog to address a joint meeting of Congress. Pelosi and Schumer said in a letter addressed to Herzog on Tuesday that they hope Congress will have the opportunity to hear from him as the “historic and joyous milestone” of the 75th anniversary of Israel’s founding approaches. See the Story
Democratic Party · Washington

Coverage: 14 sources
Senate Majority Leader Chuck Schumer predicts Democrats will hold the U.S. Senate. Schumer is counting on strong voter turnout and a final get-out-the-vote push to keep the majority in the 50-50 Senate. Republicans have gained momentum as they work to flip control of the evenly split Senate and narrowly divided House.See the Story
U.S. Senate

Senate Majority Leader Chuck Schumer predicted Thursday that Democrats will hold the U.S. Senate. Schumer is counting on strong voter turnout and a final get-out-the-vote push to keep the majority in the 50-50 Senate. Tuesday's election will determine control of Congress setting the course for legislation.See the Story
Business · Washington

56% Center coverage: 9 sources
Top U.S. senators from both parties on Thursday gave momentum to a bill pressuring OPEC+ after the group this week announced a deep cut in oil production despite lobbying by President Joe Biden's administration to keep the taps open. See the Story
Twitter · Washington

100% Right coverage: 10 sources
Democratic Sen. Chuck Schumer called on Republicans Wednesday to join in passing a pathway to citizenship for “all undocumented” in the United States.See the Story
Chuck Schumer

Senate won for Democrats, 'It's the year of Chuck Schumer'

75% Center coverage: 8 sources
Senate Majority Leader Chuck Schumer was eating Peking duck at a Chinese restaurant with family and friends when an aide called with urgent news. The restaurant erupted in cheers as the news flashed across a television screen, and a group celebrating a birthday sent him a slice of cake. Schumer has racked up a series of unexpected legislative victories this year as he has navigated Democrats' slim 50-50 majority.See the Story
Chuck Schumer

THOMAS: Charles Schumer, then and now

Sen. Charles Schumer (D-NY) said in 2009 that illegal immigration is wrong. Last week he said it's the only way to have a great future in America. Cal Thomas: Schumer's flip-flop on illegal immigration will only make things worse. Thomas: If Schumer and the Biden administration refuse to enforce immigration laws, they are violating their oaths of office.See the Story 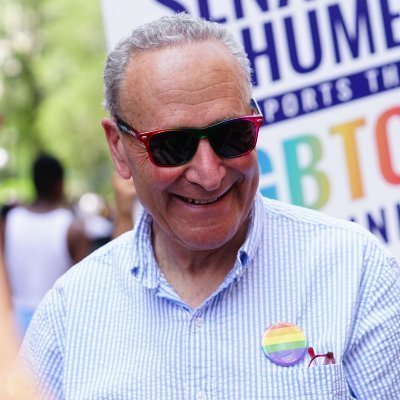