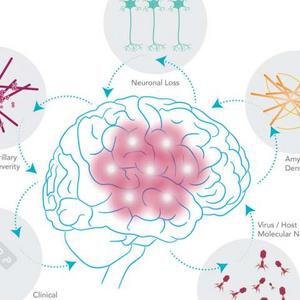 60% Center coverage: 133 sources
An experimental Alzheimer's disease drug from Eisai (4523.T) and Biogen (BIIB.O) slowed cognitive decline in a closely-watched trial but may carry a risk of dangerous side effects for certain patients, according to new data presented on Tuesday. See the Story
Europe

67% Left coverage: 9 sources
The test detects a toxic protein in the blood which appears well before other symptoms. Currently, patients can only receive a diagnosis of Alzheimer's after they suffer from memory loss. Scientists at the Univesity of Washington have designed a blood test that can detect these oligomers. This test is known as SOBA, which stands for soluble oligomer binding assay.See the Story
Alzheimer's Disease

Coverage: 8 sources
New study is the first to identify a molecule in urine that can reveal early-stage Alzheimer's disease. Findings could pave the way for an inexpensive and convenient test for the disease. Current methods of diagnosing the condition are expensive and inconvenient. Researchers suggest many patients only receive a diagnosis when it is too late for effective treatment.See the Story

How soon could lecanemab be prescribed to treat Alzheimer's disease?

Colombian woman was missing for two days after traveling to Miami. Family members claim that there was negligence on the part of the airline they flew on.See the Story
Alzheimer's Disease · Indianapolis

100% Left coverage: 1 sources
INDIANAPOLIS (WISH) -- According to the Centers for Disease Control and Prevention an estimated 6.5 million adults 65 and older are living with Alzheimer’s disease.  The disease results in a rapid cognitive decline that cannot be reversed. However, if caught early the progression can beSee the Story
Alzheimer's Disease

Lecanemab a Game-Changer for Alzheimer's? Not So Fast

Full findings from the CLARITY AD trial show that treatment with the monoclonal antibody lecanemab led to modest cognitive benefit in patients with early Alzheimer's disease (AD) Yet, the modest benefit got lost in some mainstream news coverage. A Lancet editorial published December 3 hopes to temper "hype and hope" regarding lecanemab.See the Story
Alzheimer's Disease · California

Coverage: 2 sources
Scientists are buoyed by new findings that could mark a turning point in the field. New drug, called lecanemab, is a monoclonal antibody that targets a protein, amyloid, which clumps into plaques in the brains of people with Alzheimer's. The new drug is expected to win preliminary approval by the Food and Drug Administration next month.See the Story
Marvel Studios · Los Angeles

41% Center coverage: 27 sources
Thor star Chris Hemsworth is taking a break from acting after discovering he has a strong predisposition for Alzheimer's. While starring on the National Geographic series Limitless, Hemsworth discovered he had a rare gene which makes him eight to 10 times more likely to contract the disease. Only one in a thousand people are likely to have the same gene.See the Story
Alzheimer's Disease

100% Center coverage: 7 sources
Gantenerumab is part of a class of injected drugs designed to remove sticky protein pieces called beta amyloid from the brain. A buildup of those pieces is a hallmark of Alzheimer's. Roche, the company behind the drug, said it appeared to remove less of the protein pieces than expected.See the Story
Peter Dutton

71% Right coverage: 7 sources
Peter Reith died peacefully on the afternoon of 8 November 2022, his family said in a tweet on Tuesday evening. The Liberal politician from Victoria served in the House of Representatives from 1982 to 1983 and from 1984 to 2001. He was the Liberal party's deputy leader from 1990 to 1993 and served as a minister in the Howard government.See the Story

Medical Xpress
Center
Suggest a source
Looking for a source we don't already have? Suggest one here.

How is the media covering Alzheimer's Disease?