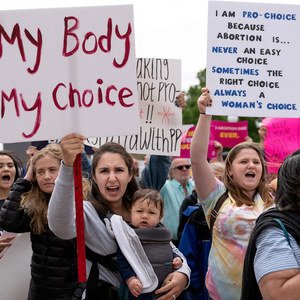 73% Center coverage: 37 sources
The Biden administration is still actively searching for ways to safeguard abortion access for millions of women, even as it bumps up against a complex web of strict new state laws enacted in the months after the Supreme Court stripped the constitutional right.See the Story
Keith Ellison · Minneapolis

60% Center coverage: 10 sources
A Minnesota town has backed away from a proposal to let people sue abortion providers, including organizations that provide abortion drugs by mail, after the state’s attorney general warned that the plan was unconstitutional.See the Story
US & Canada · Omaha

Left57%
Center29%
Right14%
Blindspot
Get the weekly Blindspot report sent to your inbox and stay up to date with your bias blindspot.

100% Left coverage: 1 sources
Supreme Court threw out a challenge from NI Attorney General Dame Brenda King. The court unanimously supported the legality of the Bill, which was passed by the Northern Irish Assembly in March. Greens MSP Gillian Mackay is to put forward a Members’ Bill in Holyrood to roll out protections across Scotland.See the Story
Europe · Northern Ireland

100% Left coverage: 1 sources
Dame Brenda King referred a clause in the Abortion Services (Safe Access Zones) Bill to the Supreme Court after it was passed by the Northern Ireland Assembly in March. She argued the clause does not provide for a defence of reasonable excuse. A panel of seven justices concluded that the clause is not incompatible with the rights to freedom of conscience, assembly and expression of protesters, enshrined in the European Convention of Human Rights.See the Story
Abortion · Glasgow

'I thought abortion protests only happened in America'

100% Left coverage: 1 sources
Lily Roberts, now 22, faced intimidation and harassment as she attempted to attend her abortion at the Queen Elizabeth University Hospital in Glasgow. She was met, at 7am on the day of her scheduled appointment, with “around 15 to 20 protesters holding banners and giving me the classic tropes that abortion is murder” She said: “They had tonnes of banners and it was really a very unavoidable and scary presence”See the Story
Abortion

State Battles on Abortion Access Are Ahead in the New Year

Kansas Governor Laura Kelly says she expects the issue to be a topic in next year's session. Nearly 60% of voters in Kansas voted to uphold abortion rights in the Primary. It will be up to Republican leaders to decide whether the legislation moves forward. The new Democratic Minority Leader, Representative Vic Miller, said Hawkins comments are not in touch with the people of Kansas.See the Story
Abortion

Pro-Lifers Still Hearing Crickets From FBI After Being Firebombed

100% Right coverage: 2 sources
The FBI once again refused to say whether a single individual has been arrested in relation to a string of attacks against pro-life organizations.See the Story

How is the media covering Abortion?