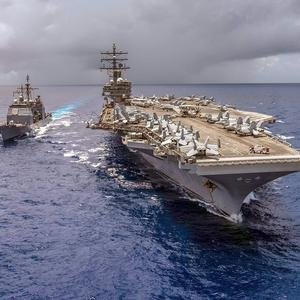 50% Center coverage: 18 sources
A jury in Maine awarded a now-retired state trooper $300,000 Friday after finding that the state police retaliated against him when he raised concerns about the agency’s intelligence gathering work.See the Story
U.S. Navy

U.S. accuses Iran patrol boat of harassing its vessels in Strait of Hormuz

49% Center coverage: 8 sources
The United States is accusing Iran of harassing its Navy ships as they transited the Strait of Hormuz earlier this week.See the Story

Left43%
Center57%
Right0%
Blindspot
Get the weekly Blindspot report sent to your inbox and stay up to date with your bias blindspot.

On December 7, the U.S. pauses to remember the "date which will live in infamy" - the day of the Japanese surprise attack on Pearl Harbor, which pulled the United States into the Second World War. More than 2,400 American servicemen and civilians were killed in the raid on the island of Oahu - the majority of them Navy Sailors and Marines. The attack sank or damaged eight battleships, three destroyers and three cruisers and destroyed nearly 190 …See the Story
U.S. Navy

100% Right coverage: 1 sources
A-12 Avenger – The US Navy’s stealth bomber mistake? It was a great concept but also a cautionary tale about how not to run a defense acquisition program. The A-12 Avenger II was a stealth flying wing bomber that was supposed to take off from aircraft carriers. But not a single airplane was ever built after […] The post A-12 Avenger: The U.S. Navy’s Stealth Bomber Folly appeared first on 19FortyFive.See the Story
U.S. Navy

Medium Aircraft Carriers: The Big Idea the US Navy Hates

100% Right coverage: 1 sources
Medium Aircraft Carriers – Why Not? Go big or go home. That’s what the U.S. Navy says when it comes to aircraft carriers. The Americans build supercarriers with over 5,000 sailors. They are over three football fields long with a displacement of 100,000 tons. With two nuclear reactors and four shafts, they can carry around 90 […] The post Medium Aircraft Carriers: The Big Idea the US Navy Hates appeared first on 19FortyFive.See the Story
U.S. Navy · Germany

Americas The US Navy awarded a $75 million modification to Bell Boeing, which exercises options to procure 12 Nacelle improvements kits, rotable pool components and interim spares. Additionally, this modification provides for the installation of 29 kits in conjunction with conversion areaSee the Story
U.S. Navy

100% Right coverage: 1 sources
Why are there so few Seawolf-Class submarines?: In Mother Nature, “seawolf” is another name for the Atlantic Wolffish (Anarhichas lupus), a rather gruesome-looking sea creature that survives in waters with temperatures as low -1 to 11°C. It preys upon hardshell crustaceans, mollusks, and echinoderms.  The animal’s namesake in the world of nuclear-powered fast-attack submarines (SSNs), […] The post Seawolf: The Best U.S. Navy Submarines Ever? app…See the Story
U.S. Navy

The US's experimental 'lightning carriers' are 'much more capable' than China's current carriers, US admiral says

100% Left coverage: 1 sources
The US Navy is experimenting with the "Lighting Carrier" concept. It envisions amphibious assault ships stocked with US Marine Corps F-35B fighter jets. A light aircraft carrier embarks with fewer jets than a fleet aircraft carrier. China has built and launched three aircraft carriers over the past decade.See the Story
U.S. Navy · Iran

Iran’s IRGC Navy harassed US ships in Strait of Hormuz, US says

100% Left coverage: 1 sources
An IRGC patrol boat harassed two US Navy ships just days after one of them was involved in the seizure of 50 tons of smuggled ammunition bound for Yemen.See the Story
U.S. Navy

Astute: The Submarine As Stealth as a Dolphin (Not in the U.S. Navy)

100% Right coverage: 1 sources
The Royal Navy’s HMS Audacious completed its first NATO patrol in the Mediterranean several months back. It is the senior service’s newest and most advanced submarine – the fourth of seven new cutting-edge £1.3bn Astute-class submarines. These are the most powerful attack submarines ever operated by the Royal Navy. HMS Audacious joined her sisters – HMS Astute, Ambush, and Artful –in January of this […] The post Astute: The Submarine As Stealth …See the Story

How is the media covering U.S. Navy?