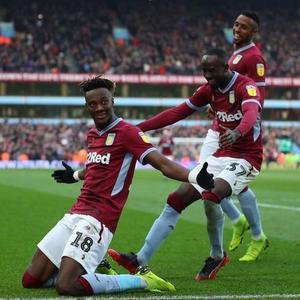 57% Right coverage: 7 sources
Grealish drunkenly criticised Almiron during the club's trophy parade. Manchester City midfielder was keen to set the record straight. Grealish messaged Matt Targett to say he was sorry for his comments. Almiron has been in fine form this season, scoring eight goals in 15 games.See the Story
Vincent Kompany · Middlesbrough

Middlesbrough have made a new addition to their coaching staff. They have brought in former Aston Villa man Aaron Danks. Ex-Wigan Athletic boss Roberto Martinez has cut ties with the Belgium national team. Leeds United have no plans to recall Charlie Cresswell from his loan spell at Millwall.See the Story
World Cup · England

Morocco top group after 2-1 win over Canada. Former Wolves man Romain Saiss and his team mates were not expected to progress from their group, which included Belgium and Croatia. Belgium missed out to Croatia for the second spot after a shocking campaign. A goal surrounded in controversy played a part in the Germans taking an early exit from the World Cup.See the Story

100% Left coverage: 1 sources
All the latest Aston Villa news as BirminghamLive brings you the thoughts of the fanbase on a Jack Grealish returnSee the Story
Soccer · Greater London

Aston Villa and Arsenal ‘monitor’ Tammy Abraham’s situation at AS Roma, according to La Repubblica, relayed by LaRoma24.it. This report has surfaced a day after Il Messaggero explained the Villans are keen to sign the former Chelsea man, who has set his sights on returning to the Premier League. It was also explained Aston Villa are interested in negotiations with the Serie A side to sign him. Unai Emery’s side are now joined by Arsenal as the t…See the Story
Manchester United · Villa

Coverage: 2 sources
Unai Emery enjoyed a dream start to life in the Aston Villa dugout as irked Erik ten Hag admitted his meek Manchester United side deserved to lose. Emery masterminded his new clubs first Premier League win against the Red Devils at Villa Park since August 1995. Leon Bailey struck an early blow that Lucas Digne added to with an excellent free-kick in just the 11th minute, only for Jacob Ramsey to inadvertently deflect home a Luke Shaw strike.See the Story
Soccer

50% Left coverage: 4 sources
Manchester United lost 3-1 to Aston Villa in their Premier League clash. Erik ten Hag says his side's performance was "not acceptable" United had been on a promising run of nine matches without defeat in all competitions. Leon Bailey and Lucas Digne scored in the first half for the visitors.See the Story
Soccer

46% Left coverage: 11 sources
Aston Villa ended their 27-year wait for a win at home in the league to Manchester United. Emery admitted to watching United 17 times before their Europa League final clash last year, when he was Villarreal coach, but this week, having only taken charge of Villa.See the Story
Soccer

Coverage: 7 sources
Manchester United travel to Villa Park to face Aston Villa in their penultimate English Premier League match before the FIFA World Cup. The Red Devils will look to keep up their winning momentum as they vie for the top four places. Villa sit in 16th place in the league table, level on points with Leeds.See the Story
Soccer

Predicting how Aston Villa vs Man United will play out today

67% Left coverage: 3 sources
Manchester United take on Aston Villa in the Premier League on Sunday. Erik ten Hag's side have won their last 10 games in all competitions. Unai Emery's side are currently fifth in the table, one point behind Newcastle. Villa were thrashed 4-0 by Newcastle last time out but put four past Brentford in their previous outing.See the Story

Manchester Evening News
Unknown
Suggest a source
Looking for a source we don't already have? Suggest one here.

How is the media covering Aston Villa?