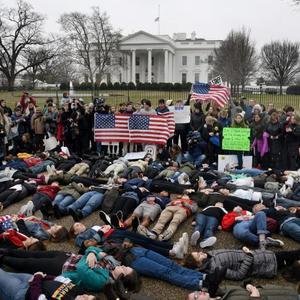 54% Center coverage: 196 sources
The white gunman who massacred 10 Black shoppers and workers at a Buffalo supermarket pleaded guilty Monday to murder and hate-motivated terrorism charges, guaranteeing that he will spend the rest of his life in prison.See the Story
US & Canada · Uvalde

68% Center coverage: 121 sources
Nearly three dozen survivors of the May massacre at Robb Elementary School in Uvalde, Texas, filed a class action suit against various law enforcement agencies on Tuesday. The lawsuit scorches law enforcement's response to the tragedy, arguing that agencies strayed from protocols. 19 children and two teachers were shot and killed in what became the second-deadliest school shooting in U.S. history.See the Story
Gun Violence · Chesapeake

65% Center coverage: 95 sources
A Walmart employee who survived last week’s mass shooting at a store in Virginia has filed a $50 million lawsuit against the company for allegedly continuing to employ the shooter — a store supervisor — “who had known propensities for violence, threats and strange behavior.”See the Story

Left39%
Center61%
Right0%
Blindspot
Get the weekly Blindspot report sent to your inbox and stay up to date with your bias blindspot.

IN THE DOCK: ‘Burial society rivalry’ at the heart of Nomzamo tavern mass shooting, says one accused at bail hearing

100% Center coverage: 1 sources
Five men are accused of killing 16 people at a tavern in Nomzamo Park, Orlando East, in July. They face 19 murder charges and one charge of robbery with aggravating circumstances. The applicant said he belonged to the Terene Ea Khosi Mokata burial society. In his affidavit, he said the killings were committed as revenge for the killing in Kliptown.See the Story
Mass Shooting

100% Center coverage: 1 sources
Raleigh, North Carolina — On October 13, 2022, members of the Raleigh Police Department (RPD) responded to a mass shooting in the Hedingham neighborhood located in Northeastern Raleigh. Five individuals died, and two others sustained injuries during this incident. Over the course of several hours, a search ensued for the suspected shooter that included an […]See the Story
Gun Violence · Chesapeake

Coverage: 2 sources
Andre Bing, an overnight supervisor at the store, methodically shot co-workers. Four others were injured, three of them by gunfire. Bing then took his own life. A lawsuit filed by a survivor of the shooting alleges that Walmart should have known that Bing was a threat.See the Story
US & Canada · Little Rock

69% Center coverage: 80 sources
The last conversation Sandra Torres had with her 10-year-old daughter was about her nervous excitement over whether she’d make the all-star softball team. Hours later, Eliahna Torres was one of 19 children and two teachers massacred at their elementary school in Uvalde, Texas.See the Story
US & Canada · Chesapeake

70% Center coverage: 37 sources
The youngest victim of the shooting at a Walmart in Chesapeake, Va., on Tuesday was a 16-year-old employee, authorities announced. See the Story
US & Canada · Chesapeake

66% Center coverage: 194 sources
The Walmart supervisor who fatally shot six co-workers at a store in Virginia bought the gun just hours before the killings and left a note on his phone accusing colleagues of mocking him, authorities said Friday.See the Story

KRDO
Center
Suggest a source
Looking for a source we don't already have? Suggest one here.

How is the media covering Mass Shooting?